The End of Timeshare in Europe! 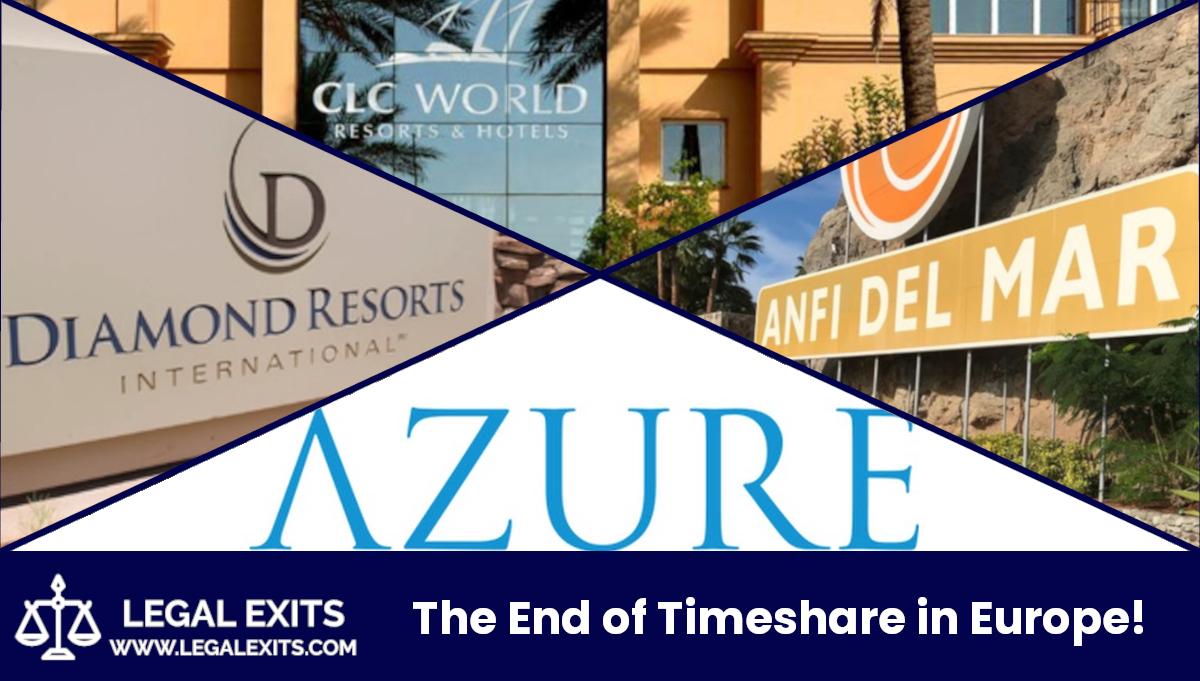 The timeshare industry has been on the decline since 2015. This was the year in which the Spanish Supreme Court ruled that the majority of the timeshare in Europe were illegally sold, or the resorts can no longer meet up to their contractible obligations. Long term holiday products consist of timeshare fixed/floating weeks, point systems, fractional ownerships and holiday club memberships.

This allowed timeshare owners to null and void their contracts and many were now eligible to claim compensation. This reduced the number of timeshare members, and with the cost of package deals available in Europe, the number of new members buying timeshares were also on the decline.

Travel restrictions caused by the global pandemic has been the final nail in the coffin for the timeshare industry. Timeshare resorts began to build up huge debts, forcing Europe’s largest timeshare resorts into bankruptcy and liquidation.

A part of one the world’s largest and more credible timeshare groups, Diamond came to Europe with a reputation for high-quality resorts in their original country of America. Providing an excellent selection of nearly fifty resorts around Europe, Diamond provided their customers with ample choice.

The downfall of Diamond Resorts began in November 2017, a little over a year after its takeover by Apollo Global Management in June 2016. Approximately 1000 staff were called into simultaneous meetings in around 15 of Diamond’s various European locations. There, they received instructions to clear out their desks and prepared for the imminent closure of these offices. The explanation provided was that extreme measure were required, due to declining sales since the takeover.

Of course, this was not Diamond’s only problem. A recently-introduced and somewhat questionable fractional product looked set to cause legal headaches. An ever-increasing stack of claims regarding illegal contracts further increased Diamond’s problems.

Diamond Resorts International have since announced that they are set to be acquired by Hilton Grand Vacations. Time is too early to tell if this will cause further problems for existing Diamond members. It is expected that Hilton may want to upgrade some of the resorts to meet the luxury Hilton standard. This could cause availability issues and an increase in maintenance fees.

Founded by Billionare Bjørn Lyng in 1992, Gran Canaria’s prestige Anfi del Mar quickly set the standard for European timeshare resort quality. Boasting a man-made white sand beach and heart-shaped island, Anfi cost Lyng an absolute fortune to construct. A fortune that, whilst knowing little of the timeshare industry himself, he was naturally anxious to recoup.

Led by overall director Calvin Lucock and Sales & Marketing Director Neil Cunliffe, Anfi’s sales team were pretty much given free reign to sell as many weeks as possible, by any means necessary.

In January 1999, the Spanish Government passed new legislation in order to strictly regulate timeshare activity in the country. these new laws specifically banned many of the terms that Anfi (and other companies) were including in their contracts. Anfi chose to carry on regardless, with no changes to their sales strategy. Thousands of now completely-illegal contracts continued to be signed.

The first successful Supreme Court victory against Anfi for use of illegal contracts in 2015 brought with it an avalanche of additional claims and extremely public defeats for the resort.

On September 23 2021, Anfi Sales S.L and Anfi Resorts S.L were declared bankrupt! Debts had amounted to an astonishing 56.6 millions Euros.

With five different locations on the ever-popular island of Tenerife, Silverpoint quickly rose to prominence within the European timeshare industry, following it’s creation in the 1980s .

Originally founded under the name of Resort Properties by British businessman Bob Trotta, the company quickly appointed Mark Cushway as Executive Director. Cushway rapidly increased turnover for the group, eventually stepping into the role of CEO during the company’s re-branding as Silverpoint.

Cushway was responsible for the creation of several dubious investment schemes for Silverpoint, which saw customers buying a share of something like a yacht, with the promise of a significant return on their investment down the line.

Along with Anfi, Silverpoint were hit particularly hard by legal action as a result of flouting Spanish timeshare regulation. The collapse of the company soon followed, with many customers who had successfully won court victories against them being left without compensation when the company was liquidated.

Beginning with the founding of the Las Farolas resort on the Costa del Sol by South African-born Roy Peires in 1984,  Club La Costa grew swiftly during the 1980s and 1990s.  Expanding to encompass 32 resorts globally, the company was eventually re-branded as CLC World Resorts & Hotels in 2013. Luxury canal boats and yachts were also added to the company’s holiday ownership inventory.

With a significant portion of its profile in Spain, CLC quickly ran into financial difficulties, once the Spanish courts began to rule against the use of illegal contracts.

With claims against them totalling over 20 million Euros, CLC began laying off its sales staff in late 2020. Club la Costa (UK) PLC, the company responsible for sales of new timeshare, was swiftly placed into administration. Four of CLC’s Spanish companies followed suit in December.

Customers seeking to claim compensation were informed that there was no money to be had, as the company was in liquidation. However, it is common knowledge that CLC World has an active and solvent real estate arm and so customers can still pursue compensation.

What will happen next for timeshare in Europe?

Timeshare resorts, large and small, are beginning to sell the resorts off as freehold real estate, as seen recently with MGM’s Muthu Royal Parque Albatros in Tenerife. Around 160 apartments have been put up for sale in this resort alone, which currently accommodate approximately 8100 timeshare points owners per year.

As timeshare companies begin to sell their assets and close down, timeshare points owners such as MGM’s Club Infiniti points, CLC points, Diamond points, RCI fixed points and basically anyone who uses their timeshare via any exchange company, such as Interval International and RCI will find it extremely hard to get the accommodation that would like. Currently there is not enough accommodation for every timeshare owner to take their holidays, and this is not going to improve.

Fixed week timeshare owners will continue to claim compensation and / or terminate their contracts. This will increase annual maintenance fees for the remaining members until it becomes too expensive for anyone to handle.

Who can claim compensation?

Claims may also be successful if any payment were made within the 14 days cooling off period, including deposits. Promises of exclusivity at a resort where non members can now pay to stay. There are many factors that need to be considered when making a compensation claim.

Use our compensation calculator to find out if you are eligible to claim compensation today. We will provide you will all the relevant information regarding claims as well as terminating a timeshare contract.

previous post
MGM to sell Royal Parque Albatros
Next Post
Customers Desperate to Get Out of Timeshare Contracts, as Maintenance Continues to Rise.