Use of illegal timeshare contracts exceeding 49 years in Europe 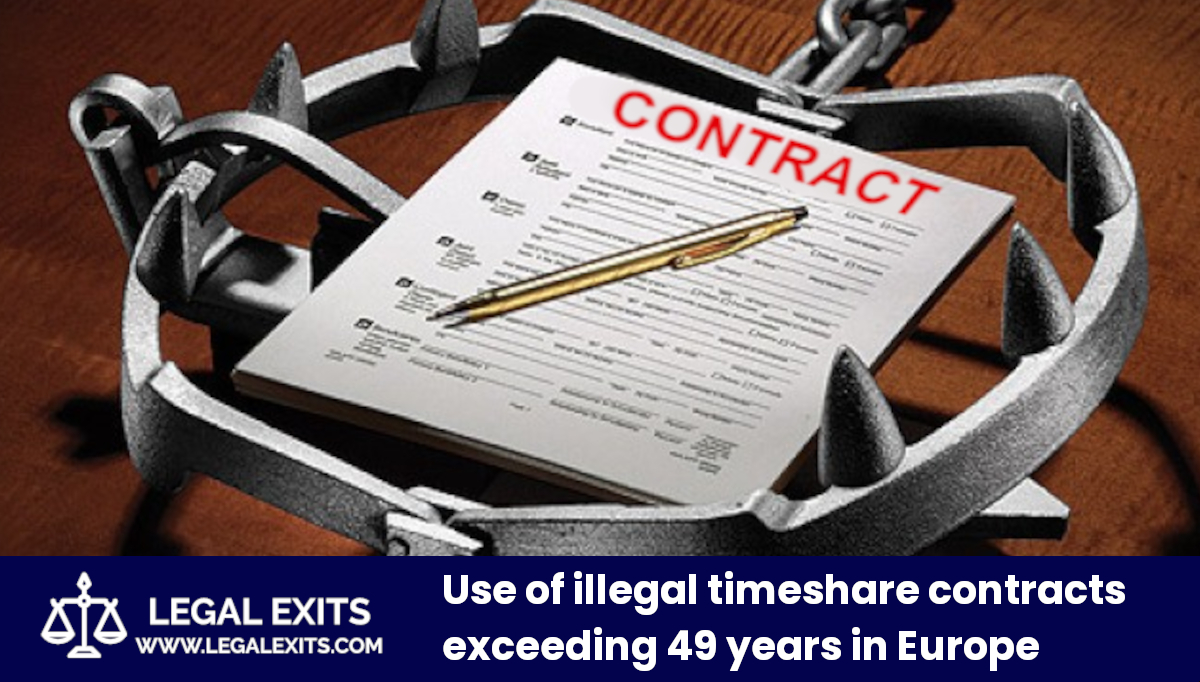 Many owners still in possession of illegal timeshare contracts.

Despite what the timeshare resorts are telling their customers, many owners are currently tied into illegal timeshare contracts. If you purchased a long-term holiday product in Europe, such as timeshare, points, floating weeks or fractional ownership, the contract must stipulate an end date, which cannot exceed 49 years.

An EU Directive sets the laws regarding the sales of timeshares to protect the consumer. These laws have been in place since 1999. Even if you purchased a timeshare prior to 1999, the timeshare company had to update the agreements.

Why are timeshare resorts not abiding by this law?

It was more profitable for resorts to use illegal timeshare contracts and have members believe they have to pay these fees forever, than to admit to them that they can walk away from their timeshare after a certain number of years. If timeshare owners knew that they could choose between walking away, or have to opt-in to extend the membership, most timeshare owners would walk away. It is human nature; people need to be sold into an idea.

This is also why many timeshare resorts broke the law by taking deposits during the cooling off period, rather than waiting the 14 days that the law states. They knew that people would change their mind if they had not committed. Even a happy timeshare owner, given the opportunity today, if they could go back in time and be able to go home and think about it before paying, would probably decide that the thousands of Euros that they had paid would be better off in their bank account.

Using illegal timeshare contracts in perpetuity keep their members locked into paying maintenance fees indefinitely, many resorts even added a clause that stating that the timeshare would become a part of the members estate. This meant that the ownership would then pass to their offspring, who would then be liable to continue paying the annual maintenance fees.

Which resorts are breaking the law by using illegal timeshare contracts?

Unfortunately, it seems that the majority of timeshare resorts have broken this law. Most recently we have been informed by several Marriott members that they have been given 75-year or 99-year contracts! It is extremely rare to find an unhappy Marriott timeshare owner, so this just shows that no matter how big a hotel brand is, the laws set by the EU Directive are being ignored.

What can I do if my contract has no end date, or is set to expire after a 49-year duration?

If illegal timeshare contracts have been used in the sale of your holiday ownership, you may have ground to void the agreement and even be eligible to claim compensation. Contact one of our specialist Claims Advisors today, or use our compensation calculator to check how much you may be entitled to.