In Europe alone, around 1.5 million European households are timeshare owners, more than a third of which are from the UK and Ireland, with the largest number of resorts in Spain.

Property, Real Estate and Fractional Ownerships have changed enormously in the last 20 years and in the last year alone, Legal Exits has successfully assisted over 1000 multinational clients in relinquishing ownerships and claiming compensation.

The whole timeshare compensation process can be complicated and lengthy.

It is generally completed in two sections.

Firstly, it may or may not involve the relinquishment of the ownership which is a separate process. It is also very important to point out that not every owner is eligible to claim timeshare compensation and advice is crucial in knowing whether or not to proceed before any monies are paid for the service.

The information below is designed to provides a summary as to how the law has enabled claims to proceed and will give you a useful overview in order to assess whether a claim process and compensation may apply to you. 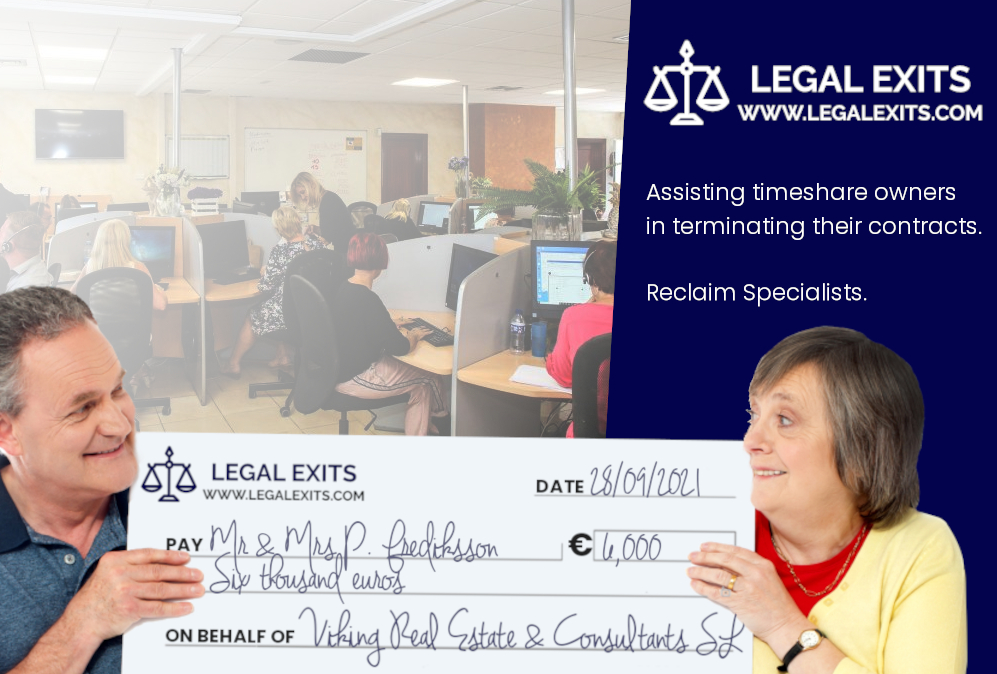 Since the 1990’s the European Union has been concerned about complaints of abuse in ‘timeshare products’ and approved the European Directive 94/47/CE on 26 October 1994 to protect consumer rights.

This Directive was introduced into Spanish Law by the Spanish Parliament approving a first regulation on 15 December 1998.

However, time proved this regulation to be insufficient.

On 29 March 2012, following the European Directive 2008/122/CE, the Spanish Parliament validated the Real Decreto-Ley 8/2012, modifying the Timeshare Regulation. All EU Member States have subsequently incorporated the Directive into their national legislation.

This Directive covered timeshare, long-term holiday products, resale and exchange products and has set a dramatic precedent that has brought about major changes in the timeshare industry. The Timeshare Directive was designed to provide consumers with important protection against unwanted timeshare contracts and contracts for similar holiday products, which often involve significant financial risks for consumers.

First Ruling from the Spanish Supreme Court with reference to ‘Perpetuity’

On 15 January 2015 a ruling of the Spanish Supreme Court came into force as a result of the aforementioned regulations.

The Court ruled in favour of a Norwegian National who argued that the “perpetuity” clause of her timeshare contract with Anfi was illegal under EU law.

In this ground-breaking case against the Timeshare giants in Gran Canaria, the court ruled that the “perpetuity” clause violates Spanish law, in that a timeshare agreement signed after 5 January 1999 cannot exceed 50 years.

As a result, for the plaintiff, the whole contract became invalid and the court ordered Anfi to repay all costs as well as all of the interest incurred, all legal fees and double the amount that the client had paid for her down payment deposit.

This subsequently had a huge impact on timeshare owners who signed their contract after 5 January 1999 and opened up more opportunities for those owners hoping to escape the ties to their contracts.

Ruling from the Spanish Supreme Court regarding Cooling off period and the Provision of Information.

The Supreme Court Ruling has also endorsed that all contracts entered into in the past should have had a 14 day cooling off period, for the purchase of products valid across the whole of Europe.

This 14 day period would have allowed consumers to consider their purchase and ask questions about the products they have selected and withdraw from the contract if they wish to do so, with no penalties.

In addition sellers should have been prohibited from asking for any form of securing Deposit.

The Directive also stipulates that any timeshare sold since the beginning of 1999 by traders should provide detailed information to purchasers in good time before the purchaser commits to a contract.

Information must include the price to be paid, a detailed description of the purchase including the timeshare location and number, details of the apartment / unit / week (s)  and the exact period and length of stay to which the purchaser is entitled under the contract. This information must also be provided in the purchaser’s own language if he/she so wishes.

Finally before concluding any agreement the trader is obliged to draw the consumer’s attention to the existence of the ‘right of withdrawal,’ and the length of the withdrawal period and that It is illegal to have the customer sign a finance agreement during this period.

In Summary the main points of focus of the ruling are

The Misrepresentation Act 1967, covers situations where a statement is made carelessly or without reasonable grounds in describing its authenticity.

Some of the most common mis-representations that have been seen relate to the declaration that, because timeshare is a quality product,…… that it can provide a huge return on an investment for the customer.

In addition, sellers have been known to guarantee that the timeshare market is easy to navigate and it will be simple to exchange or even sell your timeshare at a later date.

Though many companies have a high standard of training for their staff, many large organisations have suffered from the fact that some of their sales personnel took to presenting a product in such a way that the customer did not truly perceive the reality of what he or she was buying.

If at the time of purchase, your choice to proceed and secure a property depended on the trader’s announcements and the purchase is not what was guaranteed, then it is time to consider making a legitimate compensation claim with respect to mis-representation.

These are some of the most common statements and tactics that have been pointed out.

If any of the above information applies to you, then it has never been more important to get good advice and we encourage you to get as much information as possible from our complimentary, no obligation consultations.

Our team of in-house lawyers collaborate with a network of law firms, international lawyers, legal scholars and contract lawyers. All are experienced experts in timeshare related contracts worldwide.

Here at Legal Exits we are very proud to always provide you with honest, carefully considered advice in order for you to make the right decisions for you and your family.

Our professionalism allows us to offer a very high level of personalised service in every language, available to you every day of the week, by phone or mail.

From the moment you take our timeshare cancellation service, you will receive a reference number and a designated contact person to offer you full legal support in all relative areas of your ownership whether you wish to relinquish or file a legal claim.